Yasuke: The African Who Became a Samurai 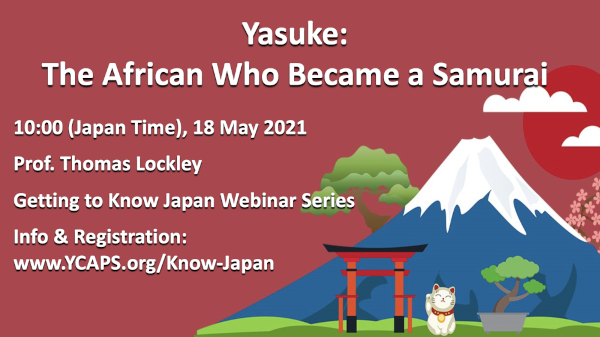 Professor Thomas Lockley will tell the amazing story of Yasuke, a man from Africa who served and fought beside Japan’s infamous warlord Oda Nobunaga and became the first foreign-born samurai. When Nobunaga was assassinated, Yasuke stayed by his lord until the end, and is traditionally held to have rescued the severed head from capture. Afterward, the real Yasuke faded from history, but his legacy was revived as an anti-imperial icon in the 20th century and a media giant in the 21st.

This event is part of YCAPS’ Getting to Know Japan Series. The webinar series is supported through the CGP Salary Assistant Grant for U.S.-Japan Community Grassroots Exchange Program.

Thomas Lockley is an associate professor at Nihon University College of Law in Tokyo. He has researched and published on a number of historical figures, but is primarily known for his work on Yasuke. He has published books about Yasuke both in English and Japanese.