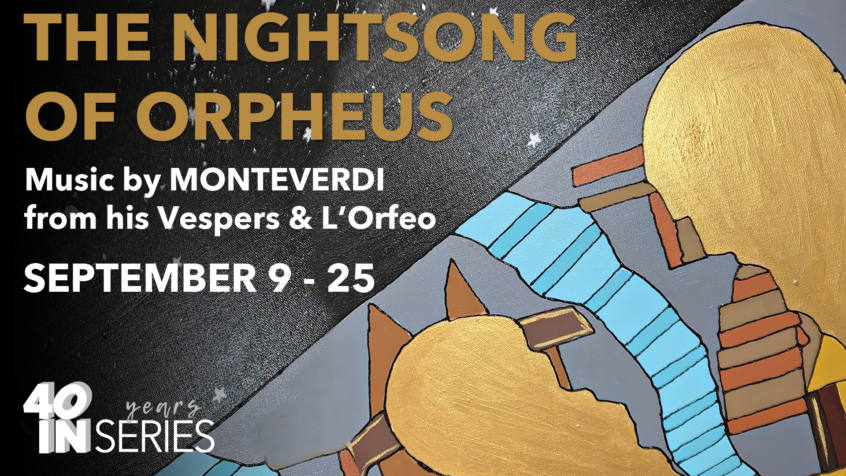 IN Series opens its 2022-2023 40th Anniversary Season with THE NIGHTSONG OF ORPHEUS – combining opera and Japanese Noh in an immersive DC and Baltimore production.


With THE NIGHTSONG OF ORPHEUS, IN Series brings together two ancient artistic forms, the first opera still performed and the oldest theatrical tradition still practiced, in an international collaboration. For this production IN Series partners with Japanese Noh Theatre company Theatre Nohgaku, and their master artist Akira Matsui, a living national treasure of Japan. The performance weaves together music from 17th century Italian composer Claudio Monteverdi’s two great masterpieces, the sacred VESPERS and opera L’ORFEO, along with fragments of traditional Noh music and dance.

With an opening weekend performances at the Source Theater, and closing weekend of performances at the Baltimore Theatre Project as part of IN Series’ first full Baltimore Season, the production, which centers on a musician’s journey to the underworld to use music to overcome death, will also be staged in 3 immersive performance at the Dupont Underground, the first time opera has ever been presented in this space.

THE NIGHTSONG OF ORPHEUS will be sung in a new English and Japanese translation, and feature a cast of leading vocal artists, the INnovatio baroque ensemble composed of musicians from around the world, as well as actors and musicians from Theatre Nohgaku.

Performance Schedule is as follows:

For more information visit and tickets visit IN Series‘s website.

This event is supported through the JFNY Grant for Arts & Culture.