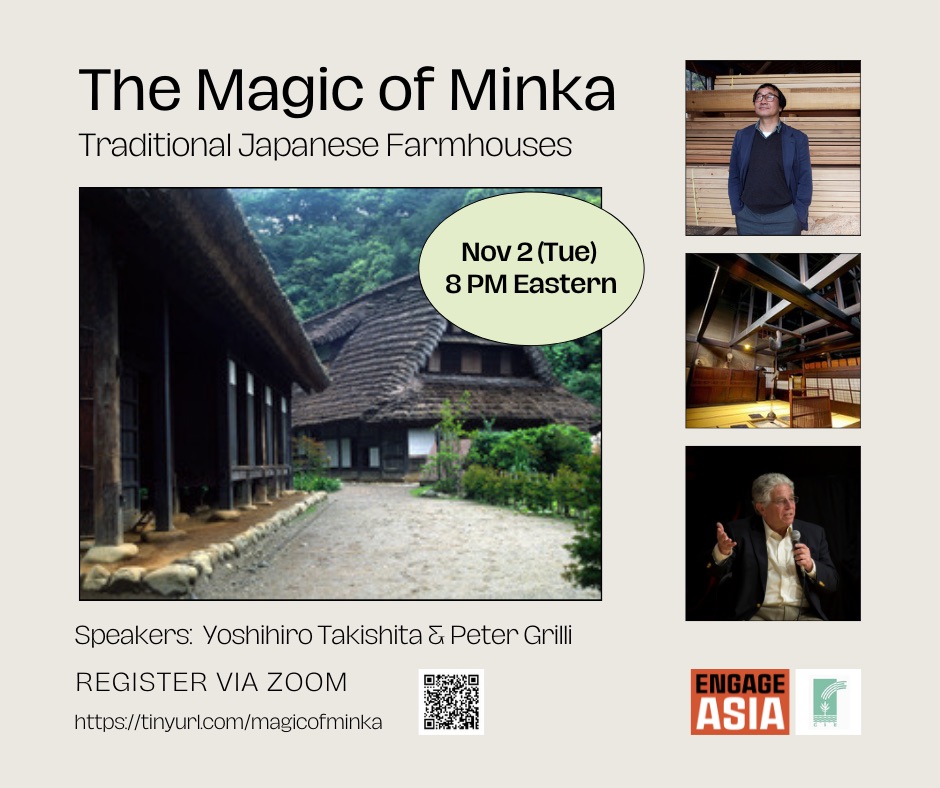 For centuries, the great traditional farmhouses known as “Minka” have provided shelter and embodied the values of the agrarian society of pre-modern Japan.  Their huge sturdy posts and powerful beams have withstood earthquakes and other natural disasters, demonstrating the artistry of Japanese carpenters and the strength of traditional wood joinery.  Preserved and reconstructed today, they offer silent testimony to the enduring beauty and resilience of traditional Japanese cultural values. This program will present the work of Yoshihiro Takishita, Japan’s leading advocate for the preservation of historic Minka and an eloquent spokesman for the wisdom and artistry to be learned from Japan’s past. The event, which EngageAsia will co-sponsor with CIE-US, will feature Japanese architect Yoshihiro Takishita and former President of Japan Society of Boston Peter Grilli.   Click here to register.  This event is supported through the CGP Salary Assistance Grant for U.S.-Japan Community Grassroots Exchange Program.

Yoshihiro Takishita is a Japanese architect known internationally for his work restoring historic Japanese farmhouses. Born in Gifu Prefecture and educated at Waseda University, he is founder of the Association for the Preservation of Traditional Japanese Farmhouses. Author of the books Japanese Country Style: Putting New Life into Old Houses and Shiguch: The Art of Japanese Joinery, he lives today in Kamakura in a 1734 farmhouse that he relocated from the mountains of Gifu and reconstructed in 1967. Peter Grilli is the former President of the Japan Society of Boston. He grew up in Japan in the late-1940s and 1950s, and was educated at Harvard and Waseda Universities. Active in U.S.-Japan cultural exchanges for more than five decades, he is well known as a writer and filmmaker on Japan.