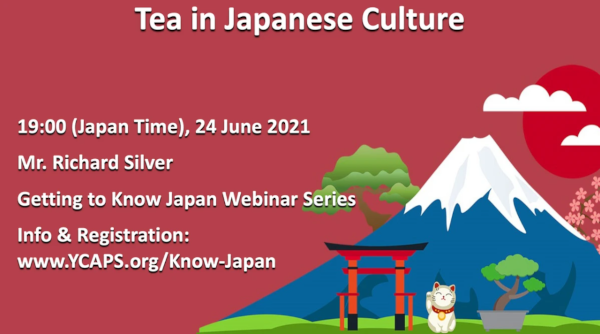 Richard Silver (U.S. Foreign Service Officer, rtd. and Urasenke practitioner, and licensed Tea Ceremony instructor) will lead a webinar that will explore the evolving role tea ceremony has played in Japanese society from its beginning in the 16th century to modern times.

Richard Silver retired from the U.S. Foreign Service in 2017 after serving in 5 countries (Romania, Japan, Pakistan, Colombia and India). Previously, he was the Executive Director of the Japan Society of Northern California; Chair, Japan Team, Federal Reserve Bank of San Francisco; and a Senior Attorney, U.S. Treasury Department. During his time at Treasury, Richard was detailed to the U.S. Attorney’s Office as a white-collar crime prosecutor as well as to the Japanese Finance Ministry as a Mike Mansfield Fellow advising on Japan’s Big Bang legal and financial sector reforms. His primary foreign language is Japanese. Richard has practiced the Urasenke tradition of Japanese Tea Ceremony (Chanoyu) for over thirty years and is a licensed instructor with the “Tea Name” of SoFu.