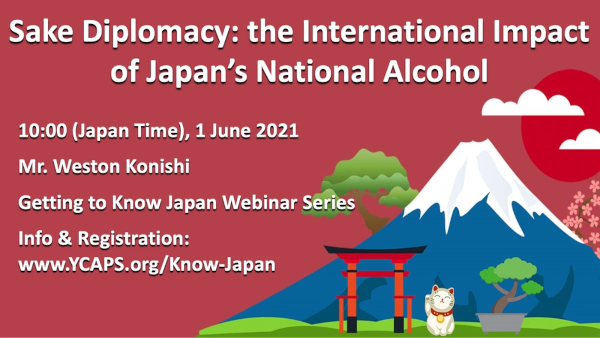 Weston Konishi, foreign affairs expert and President of the Sake Brewers Association of North America, will discuss sake’s role in Japan’s foreign relations and the U.S.-Japan partnership. After explaining basic information about what sake is and how it differs from other East Asian alcohols, he will talk about its cultural power and the growing sake movement in the United States. Konishi is a member of the U.S.-Japan Network for the Future.

Weston Konishi is a specialist in U.S.-Japan and Asia policy-related issues, with 20 years of leadership experience in the think tank and non-profit arena on both sides of the Pacific. He is currently president of the Sake Brewers Association of North America and co-founder of the LongTable Advisory Group LLC. He was formerly director of partnerships and development at the U.S.-Japan Council in Washington, DC and is a senior fellow at the Maureen and Mike Mansfield Foundation. He has authored numerous reports on political and strategic developments in the Asia-Pacific region and is a frequent media commentator on those issues. As the former COO of Peace Winds America, Weston was involved in promoting humanitarian assistance/disaster relief (HA/DR) cooperation among civil society groups and governments in the Asia-Pacific. He has served as director of Asia-Pacific studies at the Institute for Foreign Policy Analysis (IFPA) in Cambridge, MA, an analyst in Asian affairs at the Congressional Research Service (CRS) and was a Hitachi/Council on Foreign Relations International Affairs Fellow in Japan. He has lectured on Asia policy at The George Washington University and The Johns Hopkins University. Weston holds a B.A. and M.A. from the International Christian University (ICU) in Mitaka, Japan.