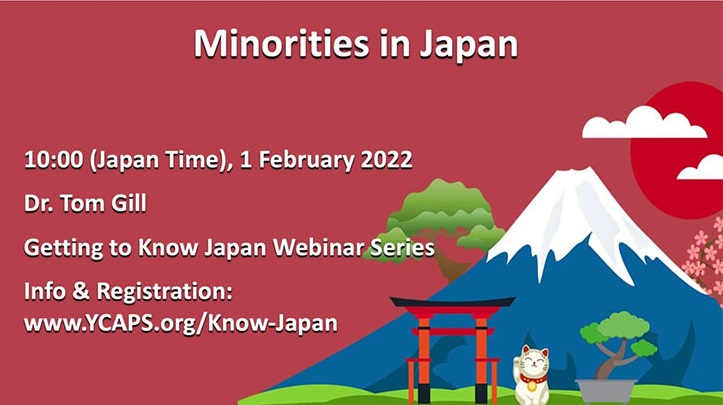 The Yokosuka Council on Asia-Pacific Studies (YCAPS) presents a weekly webinar series on Japanese culture and society, Getting to Know Japan Series. In this session Dr. Tom Gill, social anthropologist and Professor at Meiji Gakuin University, will introduce some of the various ethnic groups in Japan, both indigenous (Ainu and Ryukyuan) and migrant (Korean, Chinese, Vietnamese, Brazilian, Filipino, Nepali), discussing the challenges they face and their position in Japanese society. Click here to register. Visit the YCAPS website to learn more. The webinar series is supported through the CGP Salary Assistant Grant for U.S.-Japan Community Grassroots Exchange Program.

Tom Gill is a British social anthropologist and a professor in the Faculty of International Studies at Meiji Gakuin University, Yokohama, Japan. He is the author of two books about Japanese casual laborers, Men of Uncertainty (2001) and Yokohama Street Life (2015). Since April 2011 he has been following the fortunes of the inhabitants of Nagadoro, a hamlet within Iitate village which to this day remains closed for habitation due to the Fukushima nuclear disaster. He coedited a book on the 2011 disasters, Japan Copes with Calamity (2013). He has been lecturing in ethnic and cultural minorities in Japan for some twenty years.