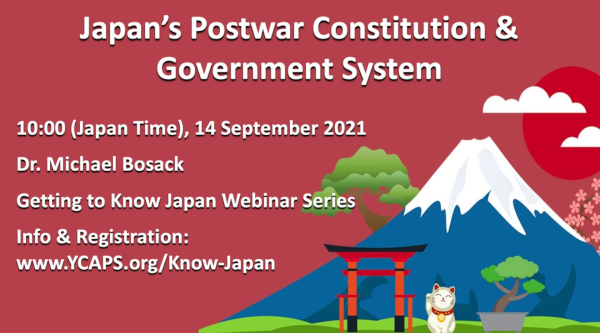 Japan will be going to the polls soon to elect members of the National Diet’s Lower House, and the ruling Liberal Democratic Party may decide to swap the current Prime Minister for a new leader ahead of the polls. In preparation for observing these political happenings, Dr. Mike Bosack will provide a primer on Japan’s postwar constitution and system of governance, offering attendees the tools for making sense of it all.

Michael MacArthur Bosack is the Special Adviser for Government Relations at the Yokosuka Council on Asia-Pacific Studies. Previously, Dr. Bosack served in the U.S. Air Force as a Foreign Area Officer. His last posting in the Air Force was as the Deputy Chief of Government Relations at Headquarters, U.S. Forces, Japan. Prior to that, Dr. Bosack was a Mansfield Fellow, where he worked in the National Diet, Ministry of Foreign Affairs, and Ministry of Defense. He completed his doctoral studies at the International University of Japan’s Graduate School of International Relations. Dr. Bosack’s Ph.D. research examined Alliance Theory and Intergovernmental Negotiations, specifically focusing on the negotiations and outcomes of the 1997 and 2015 Defense Guidelines between the United States and Japan. His other research areas include North Korean Governance and Foreign Policy, Postwar Occupation Policy, and Leadership Studies.