Japanese Minorities and Questions of Immigration 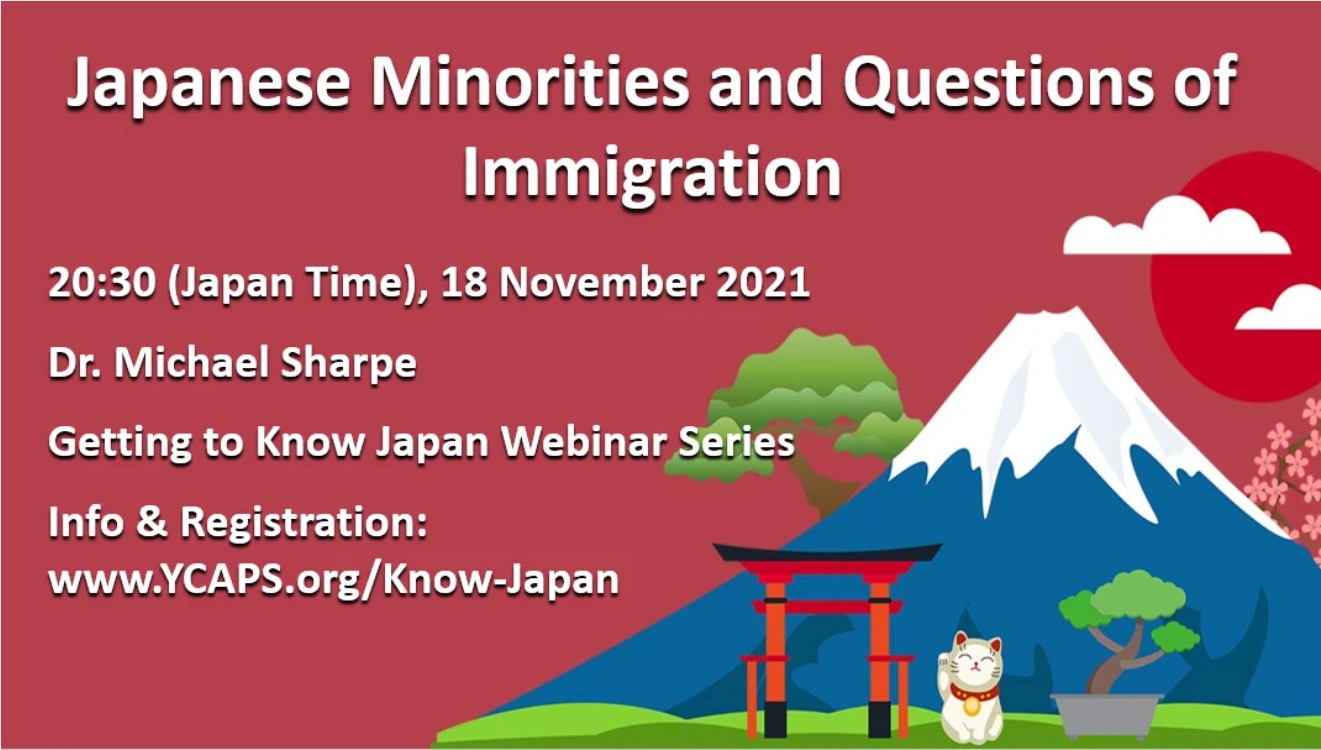 The Yokosuka Council on Asia-Pacific Studies (YCAPS) presents a weekly webinar series on Japanese culture and society, Getting to Know Japan Series. Dr. Michael Sharpe, an Associate Professor of Political Science at York College of the City University of New York will provide an introductory overview of Japanese minority groups as well as discuss some of the issues and questions regarding foreign immigration to Japan. After his presentation, there will be an open Q+A. This event will be off-the-record. Questions are encouraged. It will not be recorded. The event is free, but registration is required. Click here to register. Visit the YCAPS website to learn more. The webinar series is supported through the CGP Salary Assistant Grant for U.S.-Japan Community Grassroots Exchange Program.

Dr. Michael Orlando Sharpe is an Associate Professor of Political Science at York College of the City University of New York and an Adjunct Research Scholar at Columbia University’s Weatherhead East Asian Institute. Sharpe’s areas of expertise are comparative politics and international relations, and his research interests concern the politics of migration, immigrant political incorporation, and political transnationalism in the Netherlands, Japan, and around the world. His first book, Postcolonial Citizens and Ethnic Migration: The Netherlands and Japan in the Age of Globalization was published by Palgrave MacMillan in 2014. Dr. Sharpe’s Visiting Fellow or Visiting Scholar appointments include the Royal Netherlands Institute of Southeast Asian and Caribbean Studies (KITLV) Leiden University, University of Amsterdam, University of Aruba, Sophia University, and Keio University. He has been a Mansfield Foundation and Japan Foundation Center for Global Partnership U.S.-Japan Network for the Future Program scholar. Dr. Sharpe is currently completing his second book, The Politics of Racism and Antiracism in Japan. His other research concerns include the politics of remigration or the paid voluntary return of migrants and their families (“pay to go schemes”) and implicit boundary making in liberal democracies.