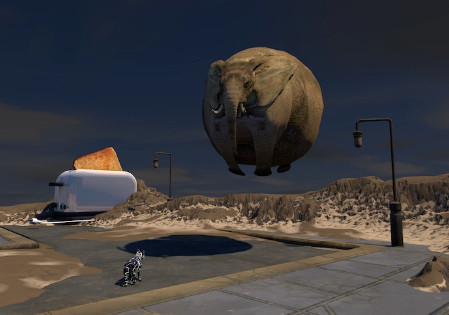 Is it possible to create theater not only for the people watching at one moment in time? Can we use theater to present a world in which people and objects are completely equal, rather than trapped in their usual subservient relationship? Devastated by the Great East Japan Earthquake in 2011, the city of Rikuzentakata in Iwate Prefecture is now undergoing immense reconstruction to elevate the area as a countermeasure against future tsunami waves and restore the lifestyles that the residents lost. However, the use of local rocks to raise the land more than ten meters (33 feet) higher than it was before has led to severe damage on surrounding mountains.

Visiting the area in 2017 and witnessing the landscape that had been so rapidly and artificially changed, director Okada Toshiki started to conceive a new work in which he would raise doubts about the so-called criteria or measures that humans use. As his collaborator, Okada welcomes Kaneuji Teppei, the artist who has expanded the possibilities of his practice by voraciously incorporating theatrical perspectives into his main methodology of collage. The resulting work also integrates the “EIZO Theater” that chelfitsch has developed since last year, attempting to take yet another approach to language and the body of the actors. What is the landscape that emerges when we deviate from anthropocentrism? Eraser Mountain is the very latest in chelfitsch’s ongoing endeavors to update theater.

Performed in Japanese with English supertitles. Recommended for ages 16+.

This performance is supported through the JFNY Grant for Arts and Culture.