Combining Your Passion with an International Career 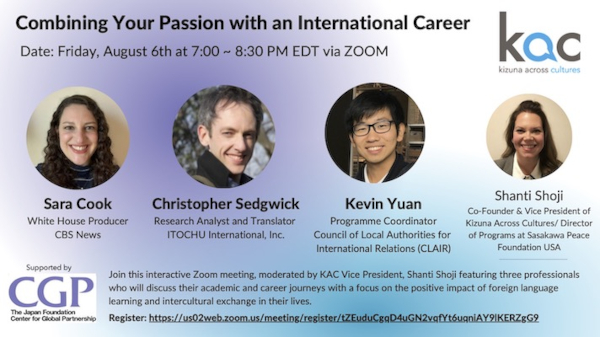 Kizuna Across Cultures (KAC) will host an interactive career panel, moderated by KAC Vice President Shanti Shoji, featuring three professionals who will discuss their academic and career journeys with a focus on the positive impact of foreign language learning and intercultural exchange in their lives. High school students are especially welcome!

Register here in advance for this event.

This event is supported by CGP through the Grassroots Program.

＊日本にいながら国際的なキャリアを目指す方を対象とした日本語でのオンラインイベントも同日開催されます。詳細はページ下部をご参照ください。
＊ There will be another event for students in Japan who are interested in working internationally. Please see below for details (Japanese only).

Sara Cook is a White House Producer for CBS News, where she has covered US domestic and foreign policy, the coronavirus pandemic, and the 2020 election. She is also a producer on The Takeout and The Debrief podcasts. Prior to joining CBS in summer 2018, Sara was a Producer at NHK Japan Broadcasting Corporation, where she covered the 2016 presidential election and the White House. Before entering media, Sara served as Congressional Liaison at the Embassy of Japan in Washington, DC. She has also held internships with the State Department, the Foreign Commercial Service at the US Embassy in the Philippines, the International Peace and Security Institute, the US-Japan Council, and on Capitol Hill. Sara received her Masters of Science in Foreign Service from Georgetown University and a BA in International Affairs from the George Washington University.

Christopher Sedgwick is a Japanese-English translator, intercultural advisor, and researcher. He is currently an analyst and translator at ITOCHU, one of Japan’s largest trading companies. He has previously served as a Security Sector Reform Officer in the United Nations Department of Peacekeeping Operations, as Speechwriter to the Ambassador and Advisor in the Political Affairs Section of the Permanent Mission of Japan to the United Nations, and as Special Assistant for Intergovernmental Affairs and Speechwriter to the Consul-General at the Consulate-General of Japan in San Francisco. He is a graduate of Princeton University’s Department of East Asian Studies and the Fletcher School of Law and Diplomacy, and was also a Japanese Ministry of Education Scholar at the University of Tokyo’s Graduate Schools for Law and Politics.

Kevin Yuan currently works as a Programme Coordinator at the Council of Local Authorities for International Relations (CLAIR), where he belongs to the team managing the Japan Exchange and Teaching (JET) Programme. Originally from Richmond, Virginia, he graduated with a bachelor’s degree in Japanese and Economics from Georgetown University in 2018, and has studied Japanese for over ten years. Along the way, he has interned with various Japan-related organizations, including the Japan Information and Culture Center (JICC) in Washington D.C., Sasakawa Peace Foundation USA, the American Chamber of Commerce in Japan, and Kizuna Across Cultures. He spent two years working as a Coordinator for International Relations in Taki Town, Mie Prefecture before relocating to Tokyo. He has also been active as a freelance Japanese to English manga and video game translator since January 2021. In his free time, he enjoys playing piano, gaming, and diving into a thrilling mystery story. 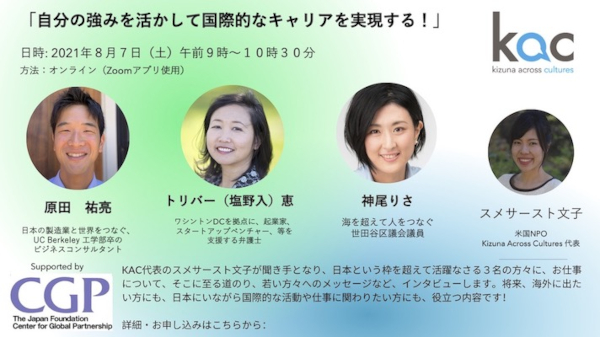