5 Tasty Ways to Make Your Time in Japan More Meaningful 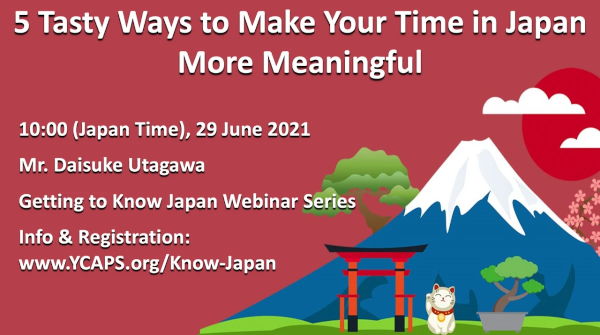 Cuisine/Food is a crystalized form of the local culture. As such, it is also wired directly to hearts of the local people. While some dishes can be perplexing for the uninitiated, the very effort of trying to understand other people’s food can be a catalyst to deeper connections and beginning of lifelong friendships. Join Daisuke Utagawa, restaurateur and advocate for using food to enrich human connections, as he discusses Japan’s food culture and its international impact.

Daisuke Utagawa is a founding partner of LongTable Advisory Group, a consulting firm that specializes in promoting cross-cultural culinary exchange as a launching point for broader business-to-business and public-private partnerships around the world. Utagawa is also a partner in several Japanese restaurants in the Washington DC area. The Restaurant Association Metropolitan Washington awarded Utagawa and his partners at Daikaya Group the prestigious Restaurateur of the Year award for 2020. Utagawa has also served as a contributing editor for National Geographic Traveler, producing five feature articles covering his travel adventures through Mediterranean food cities, Tokyo, Kyoto, Thailand, and Hong Kong. Three of the five stories have won awards. Utagawa has also lived and worked in Europe (Italy, France, and Switzerland) and the Middle East (Dubai), consulting for hospitality and media projects. He produced, wrote, and co-hosted a season of Rudy Maxa’s World that was a six-part series on food and travel in Japan, Hong Kong, and Thailand in 2017 and 2018. The series continues to air on public television stations nationwide and is streamed on Amazon Prime Video.