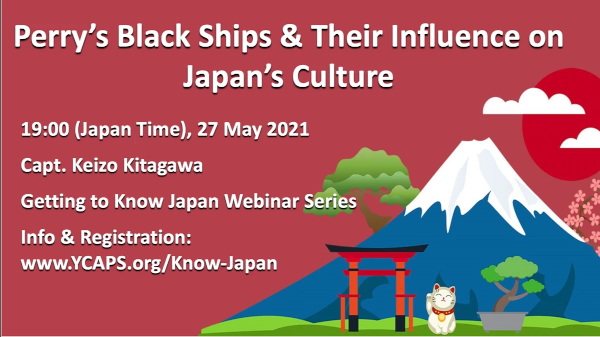 As part of YCAPS’ Getting to Know Japan Series, Captain Keizo Kitagawa will give an introductory presentation on Commodore Matthew C. Perry and his U.S. Navy expedition to Japan. This seminar will also address the impact of Perry’s “Black Ships” on 19th century Japan, the conclusion of Japans’ era of isolation and the subsequent Meiji Restoration and transition into a modern state.

Captain Keizo Kitagawa is the Chief of Operations Evaluation Office of the Maritime Staff Office in Tokyo. Captain Kitagawa joined the Japan Maritime Self-Defense Force (JMSDF) upon his graduation from the United States Naval Academy where he earned a Bachelor of Science in 1993. During his career, he earned a Master of Security Studies from the National Defense Academy of Japan in 2007, as well as a PhD from Keio University in 2018. Captain Kitagawa has experienced various ships and posts like Damage Control Officer, Navigator, Operations Officer, Executive Officer and Commanding Officer of JS Matsuyuki. His international duties include UN PKO mission, UNDOF in Syria as the Deputy Military Public Military Officer from 2003 to 2004, deployment to the Middle East in support of Operation Enduring Freedom in 2002, deployment to Djibouti for the Counter Piracy Operation from 2009 to 2010, and Defense Attaché to the United Kingdom from 2013 to 2016. His shore duties include instructor at the JMSDF Officer Candidate School where he has taught operation and navigation, International Policy Desk Officer in the Maritime Staff Office and Director of Strategic Studies Office of the JMSDF Command and Staff College. Captain Kitagawa is a frequent contributor to various academic journals and co-author of a few books, including Strategy and the Sea by N.A.M. Rodger, J. Ross Dancy, Benjamin Darnell, and Evan Wilson, eds. (Woodbridge: The Boydell Press, 2016).