The 3/11 Disaster and Its Aftermath 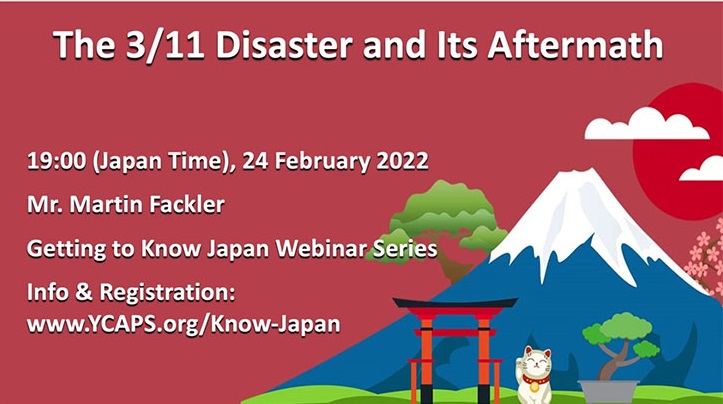 The Yokosuka Council on Asia-Pacific Studies (YCAPS) presents a weekly webinar series on Japanese culture and society, Getting to Know Japan Series. On March 11th, 2011, the Tohoku region of northern Japan suffered a triple disaster: a magnitude 9.1 earthquake off the coast resulted in a colossal tsunami that in turn devastated a nuclear power plant. YCAPS will be joined by seasoned journalist Martin Fackler, who has written extensively on the disasters and their aftermath over the past 11 years, for an introduction to the events of March 11th and the ongoing political and cultural repercussions. Click here to register. Visit the YCAPS website to learn more. The webinar series is supported through the CGP Salary Assistant Grant for U.S.-Japan Community Grassroots Exchange Program.

Martin Fackler has been a journalist in Asia for two decades, working most recently as Assistant Asia Editor at The New York Times managing the paper’s coverage of China. He was a correspondent at The New York Times for ten years, serving as Tokyo bureau chief from 2009 to 2015. In 2012, he led a team that was named finalist for the Pulitzer Prize for investigative stories into the Fukushima nuclear disaster that the prize committee said offered a “powerful exploration of serious mistakes concealed by authorities in Japan.” He has also worked in Shanghai, Beijing and Tokyo for The Wall Street Journal, The Far Eastern Economic Review, The Associated Press and Bloomberg News. From 2015-17, he was Journalist-in-Residence at the Asia Pacific Initiative, a Tokyo-based think tank. Fackler is author or co-author of 11 books in Japanese, including the bestseller Credibility Lost: The Crisis in Japanese Newspaper Journalism after Fukushima (2012). In English, he edited Reinventing Japan: New Directions in Global Leadership (2018). He grew up in Georgia, and holds degrees from Dartmouth College, the University of Illinois at Urbana-Champaign and the University of California, Berkeley.